Be Seen – Be Safe: 3 things you must do to stay visible on your bike 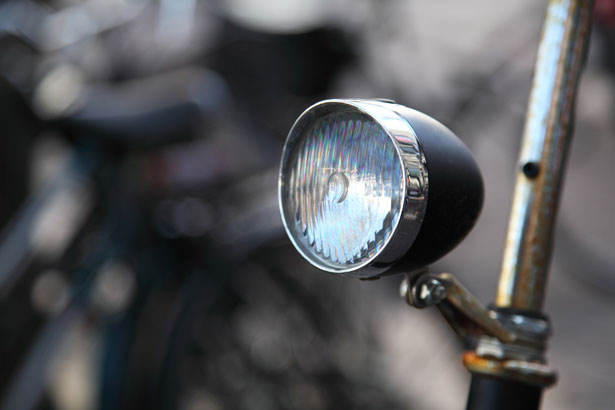 08 Nov Be Seen – Be Safe: 3 things you must do to stay visible on your bike

I was driving. It was dark. It was raining. He didn’t have any lights.

To be fair, it was never close. I came up behind him and had to pull a little over the center line to give him enough room. It wasn’t a dangerous situation – but it easily could have been.

I both drive and ride to commute in the city. I see shitty behavior on both sides. But I identify more with those on two wheels. These folks are my tribe! So I’m extra unhappy when they’re the ones being dumb: running lights, not HAVING lights, riding dangerously…

I am a little embarrassed to admit at having had my share of spats with motorists. I’m trying to rein it in. I am not embarrassed about confronting fellow cyclists though – although I only try to do this while riding myself. Street cred, you know?

Let’s talk about one of my beefs: lack of bike lights. I refuse to believe that people willfully disregard their own safety. So I’ll chalk the choice to ride without a light to ignorance or not wanting to be inconvenienced. There’s not much I can say about the latter that doesn’t involve strong language. Instead, here are 3 tips for staying visible on the road.

Most of these come from a solid piece published by Velonews last month. It was an advertorial but had some great info and scientists! Read it. It’s good

Use Lights During the Day

Yes, you need lights when it’s light. The study sited in the article noted a ‘270% increase in driver recognition of a cyclist with a flashing rear light compared to without, while another study revealed a 33% decrease in accidents for cyclists equipped with daytime running lights.’

The best lights for daytime riding are ones that have bright flash modes – especially irregular pattern flash modes. You’re trying to capture attention, after all, and our brains are good at noticing things that are out of out of the ordinary.

Fluoro kit doesn’t just look good, it makes a measurable difference in being seen. Again, our visual cortices are wired to notice motion. Making your legs and your head stand out make you considerably more visible. To do that chose the right clothing for the light conditions:

Use Lights at Night – obviously

Had I hit that guy, it would have been my fault. I agree with that. Motorists should shoulder the burden of keeping other road users safe. No argument from me. Still, it was his decision to ride with no lights. If you’re not riding with lights at night, you’re the antivaxxer of the cycling world. Not only are you putting yourself at risk, you’re threatening the safety and sanity of other road users. Don’t be that person.

Thank you for reading. If I missed anything, please do comment below!