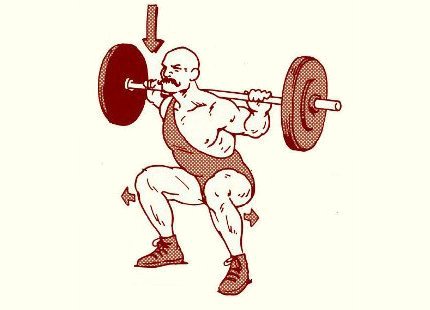 Do you squat? Do you deadlift? You really should.

You wouldn’t know it by looking out the window – thank you unseasonable warm front – but fall is here. With fall, comes the end of a season for most of us in the triathlon world – save those with late-season races in warmer climes or those ditching the bike shoes for the runners and a switch of gears for fall marathoning. The transition between that last race and the start of formal training in the late winter or spring is a weird time. I remember in years past having the mindset that the preceding six or eight months of hard work had somehow entitled me to an extended break – to work on nothing more than perfecting the ass groove in my couch.

Training, of course, is reversible. Put a different way: use it, or lose it! I remember coming back to training in terrible shape. I was arguably no more fit than the year before. Adaptation to endurance sports takes years, and wasting a year of solid effort just to relax for four months is a shame.

Fair enough, you say. But my ‘A’ race is not until June or even September. If I start training for it in November, how the hell do I periodize my training to come into form or peak at the right time? Moreover, I have a hard enough time with six or eight months of steady tri training – I’m just not interested in doing it year-round.

I have good news and I have better news. The good is that a bit of rest and recovery is definitely a good idea. Two weeks is plenty for the average athlete – more if the season left you seriously hurting. The better is that the best off-season training regimen is nothing like what you will do during the season. Off season is ideal to work on limiters. You know, the various physical and mental deficiencies that hold you back. Everyone from the newbie age-grouper to the elite athlete has something they can do better, some weak link in their set of triathlon skills. Limiters come in all shapes and sizes. The ones I want to focus on here have to do with the body’s ability to generate and transmit force and power. Your ability to do this is key to your success in any sport – triathlon is no different.

Just as with any other training objectives, training to increase force and power requires challenging your body with progressively increasing workloads. In the case of force training, workload has to be the force or resistance experienced by your muscles in performing a task. It is possible to do this to some small degree with sport-specific workouts – think of high-gear seated climbing on the bike – but it is not the most effective approach. Force training is best done in the weight room. Nothing you can do in a pool, on a bike, or on the run course will simulate the neuromuscular demands of a heavy squat or a big deadlift – nothing. Training power is a similar story. Now, I’m not talking about the functional threshold power those of you with powermeters are all bragging about, I mean short, explosive power that is developed during maximal exertions that are very short in duration.

By now, you should be asking yourself – or the computer screen – the following all-important question. I am not training to be a powerlifter, or even a sprinter. What reason do I have to spend my time in a gym performing workouts that do not directly simulate the demands of my sport?

Most triathletes are now coming off long months spent performing long and (relatively) low intensity exercise. This style of work invariable leads to the body looking at muscles as fuel – yum! This is especially the case for all the ironfolks. I don’t care how well ironman triathletes fuel during training and racing, everyone will lose muscle performing six-hour plus workouts at 60% threshold. Off season is the time to get some of that muscle back.

The big muscle groups – quads, hamstrings, glutes, pectorals, lats – are the workhorses of the body. They’re the groups responsible for the vast majority of force generated during activity. For that force to do useful work like crank pedals or pull water, it must be transferred to the ‘contact points’: the hands and feet.  That kinetic chain from major muscle group to contact point – like all chains real and proverbial – is only as strong as its weakest link. If an athlete’s kinetic chain has weak links, she is bleeding force; that is, the force is not getting to the contact point in the most efficient manner possible.

Say an athlete has wonderfully strong quadriceps – undoubtedly the most important muscle group in cycling – but weak hip stabilizers, much of that impressive force generated by the upper leg will be lost in its transfer to the foot-pedal junction. Rather than acting in a straight up-down fashion, which is the ideal, the weak hip stabilizers are unable to keep the femur (thigh bone) vertical. It either collapses towards the centre line of your body or kicks out away from it.  The knees trace ovals or figure-8s as they move. Force is wasted.

When done correctly, strength workouts train the entire kinetic chain from the big prime mover muscles to the equally important stabilizers. This is an easy performance boost.

Joints are the pivot points for the limbs. They must be able to move through and be stable at a wide range of motion during the sport of triathlon. This is especially true for the shoulder while swimming, but also important for the hip when on the bike.

I must make the distinction between mobility and flexibility. Flexibility typically describes the full range of motion of a joint. Flexibility is good, but if an athlete cannot develop force across the entire range motion, what use is this flexibility for training or competing? It’s therefore useful to introduce the concept of mobility, which is defined in a more restricted fashion. It describes the range of motion of a joint across which the muscles activating the joint are still able to generate substantial force.

I mentioned swimming. The high elbow catch that so many of strive for and struggle with is dependent very much on joint mobility. To perform the motion correctly, the shoulder is rotated to near the end of its range of motion and then must be stable enough to allow the action of the lats and pectorals to drive the arm with significant force through the pull portion of the stroke.

Hip mobility, on the other hand, is a factor when riding in aero on the bike. With a really small hip angle – near the end of the range of motion for the flexed hip – at the top of the pedal stroke, the big hip and upper leg muscles must be able to generate force to maintain even pedaling. An added bonus to hip and also hamstring mobility on the bike is the ability to achieve a lower – and therefore more aerodynamic – position.

Stronger muscles take longer to fatigue. Just like aerobic endurance, muscular endurance depends on the intensity of exercise. The closer an athlete is to her threshold – be it her aerobic threshold or her one rep max muscular threshold – the less the time to fatigue. If threshold is raised, then work at the same intensity is now farther from that threshold and therefore exercise duration before fatigue is longer.

This point breaks down to two factors. The first has to do with the body’s ability to recruit muscle fibres when performing a task.  In the interest of conserving energy, only the minimum number of fibres will be recruited – or ‘turned-on’. Most untrained individuals will be able to recruit approximately 50% of fibres in their large muscle groups at any one time. The rest remain dormant. One of the very first adaptations to resistance training is the improvement in muscle recruitment.  When the body is challenged to lift a weight heavier than it is used to lifting, the central nervous system gets more of the muscle fibres to help. Over a relatively short time, there is a marked increase in action of muscle neurons, increasing muscle contraction force without any appreciable increase in muscle mass.

Improvement in the mind body connection is a further beneficial consequence of resistance exercise. Since many of the compound lifts that I prefer involve simultaneous action of multiple muscle groups, they do take some time to learn and perfect. The exercise of learning new and complex motions, aids in learning other, sport-specific techniques.

I am often asked by beginner athletes why they can’t swim, bike, or run using the same technique as the pros. Part of the answer lies, of course, in practice. Pros get a whole lot of it. Age groupers get less – often much less. The other part can be attributed to lack of strength, joint stability, or joint mobility. Here are three examples.

The previously discussed high elbow catch in swimming is only possible if the shoulder is mobile and stable at the end of its range of motion. No amount of practice will yield an optimal catch if those two factors are absent.

The sought-after high cadence on the bike is only possible if the leg muscles are able to produce force quickly. Quick application of force is termed power. Without sufficient power, the ideal cycling biomechanics are also not possible.

Finally, many runners struggle with inhibited glute activation. They – for a whole host of potential reasons – have sleepy bums. Unless these athletes learn to activate their posterior chain leg muscles, they will always struggle with mediocre performance.

I am generally a cautious coach, and this last point is probably the most important to me in my work. Put simply, strong, pliable muscles are less susceptible to both chronic and acute trauma. I am not saying that strength training will create indestructible athletes, but there is a real reduction in susceptibility to muscular injury in those with a solid strength background.

Joints and bones too are made more resilient through resistance training. The exaggerated loads of weight lifting stimulate ligament strengthening and increases in bone density.

So. Do you squat? Do you deadlift? If you do not yet. I really think you should.

I will be running a twelve-week, biweekly strength and conditioning program for triathletes and runners. It’ll launch in early November and run through the end of January – just in time for the start of more serious, sport-specific training for most of you.

Get in touch if you’re interested in learning more and stay tuned to the x3 Facebook page for upcoming announcements.