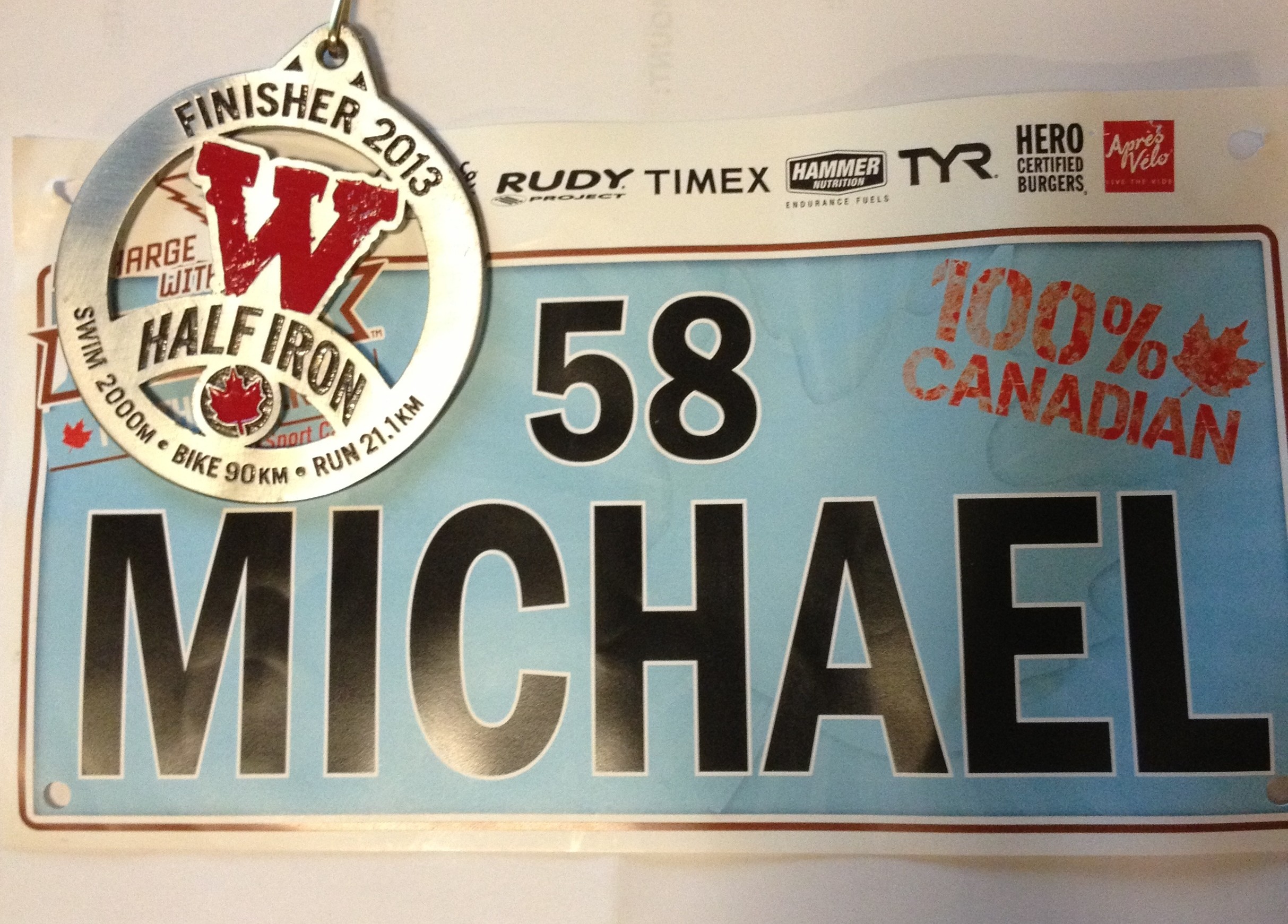 Race mornings are weird. There’s always a seemingly contradictory mix of nervous excitement, detachment, and crankiness at any small deviation from ‘the plan’. That last one needs work.

6:30 and it’s hot already. Forecast is calling for a humidex of 36C with full-on sunshine during the run. The sun is the worst – I’m worried.  Time to borrow salt pills for the inevitable, compulsive water guzzling that is sure to take place. Need plenty of water to keep the body’s cooling going, so must take salt to prevent hyponatremia: cramping, nausea, muscle failure.

In transition with about an hour to the start. We’re taking photos? Now? It’s time to claim what little real estate remains on the rack and set to organizing. Remember too that there’s probably a good line for the porto-johns to be endured. Thanks to my training ride face plant in late May, this is not only the ‘A’ race and first ever 70.3, but also the first race of the season. Transition setup isn’t as natural is it was by the end of last year. Trying something new today: toss all run accessories into a single plastic bag. Grab the bag on the way out to the run course and don the visor, race belt, bottle while on the move. Should’ve included my little Ziploc of salt pills in that bag too – stuffed into tri top pocket instead. Stuff myself into the wetsuit and jump in.

Oh man, why isn’t it just the swim today? The Canal is the place to be – a refreshing 22ish compared to the forecasted 36 out of the water. Glad this start isn’t more ‘massive’. We’re being asked to self-seed according to projected pace. ‘Hey man, how fast do you go?’ asks a water-treading neighbour – about two bobbing yellow rows back from the aquatic speedsters. ‘Maybe 1:35 – 1:40,’ I reply. ‘Oh man, let’s give these guys some room. I don’t want to be in this meat grinder,’ he calls to his friend. I don’t fear the ‘meat grinder’, but I have no love for it either. It’s a necessary evil of triathlon racing for all but the fastest and the slowest. There will be kicks and pokes and grabs to be sure, but that’s the price you pay for drafting.

The pros start one minute before the age groupers, and the tension mounts. Yellow caps crowd and start to creep past the start line while John Salt hollers at them to move back. Horn goes. Stroke, stroke, breathe, repeat. Sighting isn’t much of an issue in the canal. Swim parallel to shore and all is well. The day will be long, so take it easy on the swim. No need to push the pace. The swim is over quickly. Scramble up the bank with the help of a burly volunteer and run to transition.

No issues in transition. Hop on the Focus and get to work. Take extra time to ensure feet are comfortable in the shoes and the straps are tight. Those extra seconds matter little over a two and half hour ride.  The plan is 80% of threshold power for the duration. Never held that level of intensity for this long, but the push is part of racing. Retrospectively, should have heeded John Salt’s advice about the heat on the bike: you may not feel it at the time, but you’ll pay for the overexertion on the run.

The course generally pushes into the wind on the way out and tracks with it on the way back.  That’s the way it should be; let’s those legs rest up some before the pavement pounding. The first fifteen kilometers fly by. Feeling strong and determined.  Power is exactly at 82% and the nutrition choice – Cliff Blocks for calories and electrolytes only in the bottles – seems to be working. Chewing is a bit different at this intensity though – bite, bite, bite, swallow, inhale, repeat.

By kilometer 30, the fabric chamois of my minimal tri shorts begins suggesting its lack of suitability for long course racing. The course is as flat as it gets, so there’s no excuse to pop up out of aero and stretch to relieve the chafing downstairs. At least the roads are smooth. Running 20mm tires at 115/125PSI over anything but smooth tarmac is no picnic. It’s a gamble. I feel lucky. The first bottle exchange is encouraging. Don’t need to swap yet, but will have to pick up at least one bottle on the course. The three on the bike would have sufficed for most days, but this day is not one of those.

40k in, and fighting the wind is becoming tedious. There was that all-too-brief respite between kilometers 25 and 35, but that’s a in the rear-view now. Masticating overpriced gummy candy is all there is to look forward to. The scenery is nice enough, but looking to the side means exposing the Alien tail of my aero lid to the wind – no thanks. The neck is starting to nag too. The kick-ass aggressive position on the bike that looks so good in photos necessitates a constant state of hyperextension. It hasn’t yet forgiven the unplanned, over-the-handlebar-head-first dismount from four weeks ago.

The 60k bottle exchange is soon. Happy to having something to think about other than my current lap power. Kudos to the young volunteer who passes me the bottle of HEED. I slowed down, but not all that much. The handoff was perfect. I felt a little like a running back. The HEED is for later; now’s the time to tuck into the last planned bottle – the one with caffeine.  Suddenly, the ride gets a lot easier. Maybe it’s the caffeine or maybe that the wind is finally a friend.  The stretch between 62 and 64 is along the shore of Erie. Aerodynamics be damned. This view is worth breaking the rules. The neck approves.

Over the Forks Road bridge and back into the City. Shortly thereafter, undo the shoe Velcro, extract the feet, and stand to stretch the hamstrings and calves. My nethers are happy for the brief relief. ‘DISMOUNT’ the sign says in the distance. Okay. Shoes off and all set for a moving dismount, but trying to swing the right leg over the tall rear bottles – no dice. There is a feeling that the leg strength and flexibility isn’t where it should be coming into a half marathon, but no time to dwell on this now.  Dismount the traditional way.

Park the Focus, grab the run baggie and go. Legs feel like overcooked noodles. This isn’t just the familiar brick feeling. This is worse. The plan is to start at a 4:45 pace and run a negative split.  It quickly becomes a steady 4:45, then a steady 5:00. By the third kilometer, the letters DNF begin their unhappy waltz in the heat-rattled brain. There has been no opportunity for heat tolerance training this season. First ever half IM and it’s the hottest day of the year. Between the heat exhaustion coming on and the overused leg muscles, the prospects for a 4:50 finish fade.  Start to walk and become upset. Do I have the balls to walk this whole thing? It’s a bit of a kick to the ego to be passed in a race. To be passed while walking is something worse entirely. Decide on trying for 10s and 1s – that is, run ten minutes then walk one. Can’t run for ten minutes. Okay. Run between aid stations. Do the math brain! At 1.5k apart that’s about seven or eight minutes of running. Can’t run for seven minutes.  Remember the salt pills! What used to be salt pills are a now a white paste coating the inside of ziploc bag. Turn it inside out, lick, grimace, drink, stuff back in pocket. Drudgery sets in. I promise myself that I will quit upon reaching the next station. It’s a lie. Friendly, supportive volunteers do their best to refresh and cheer. They are my salvation. The oasis of neon yellow shirts is encouragement enough to push on. Eventually a routine establishes itself: hand off bottle to be filled with water, ask for ice, grab a gel. Dump the ice down the back of the tri top, eat the gel, drink the water. Routines are nice.

The two-looped course allows for plenty of high-five opportunities. Not feeling festive, but need to support my two athletes and a handful other club members on the course.  Trevor looks like he’s got his IM shuffle down and is running well. Duncan is smiling ear-to-ear as always.  Graeme and Ben both look well too. Erin appears a little put-out as she starts her first loop. Hope it isn’t the knee.

Second loop complete! The run-walk approach isn’t as shameful as it was at first. Just about everyone is taking walk breaks.  One last aid station! This is it. No more walking for the next two kilometers! Barbara – having been spared the run due to a bum glute – finished the swim-bike an hour or so prior and hollers at me to keep going.  The Garmin says 4:30, then 4:10. The legs do still work. Over a little rise and there’s the arch. Push now, puke later.

–          Underestimating the heat on the bike. Should have dialed back the effort.