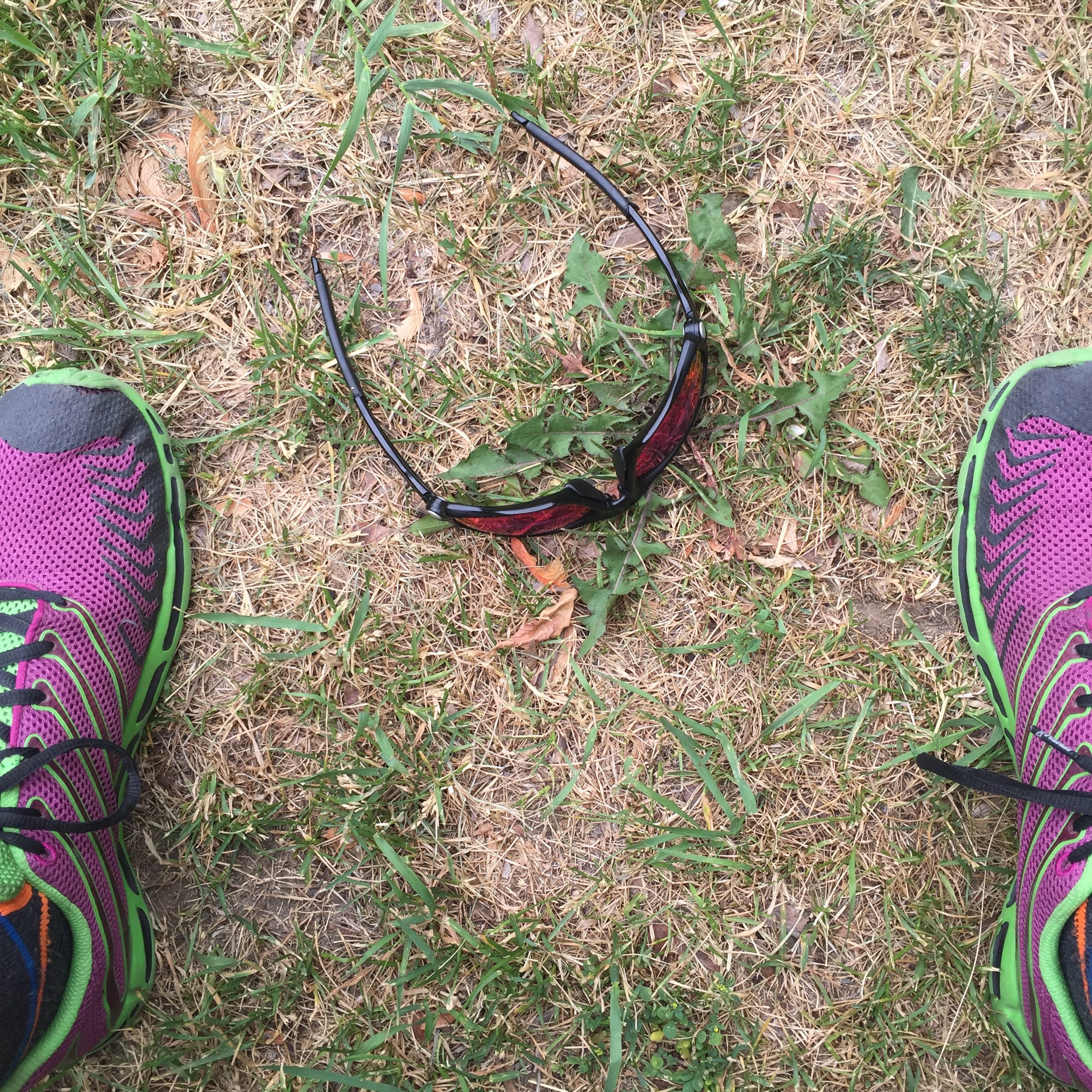 A woman, younger than me, passed me just after the turn-around of lap one of the run. She was running well, and I told her as much.

‘Thanks,’ she beamed – a little too cheerfully for how I felt. ‘Can you believe that we have to do this again,’ pause ‘and then again?’ She was, of course, referring to the fact that laps two and three were still to come.

Her words implied suffering – and no doubt there was some of that – but her smile and her stride told a different story. Positivity and form focus are terrific coping mechanisms. I know this. I preach both on a regular basis. I tried to stay chipper and ignore the body’s insistence to stop. It did not work.

After completing that first lap and running to the first aid station I quit. Another one of my go-to suffer tricks – the permission to quit – you know, the ‘out’ you give yourself, but are never meant to take? Well, I took it.

‘Are you okay’ asked the concerned volunteer as I walked off the course at his aid station.

I knew that I had two X3 athletes on the course and that I was – maybe – setting a bad example. I knew that this was my one long race of 2016, and the one on which I had pinned my hopes. I knew that I wasn’t entirely spent physically. It didn’t matter. The drive – the motivation to suffer through it – was not there.

So I sat in a chair at that aid station with a bottle of water and the kind words of understanding from the volunteer. I watched athletes who I had just passed file past me. Sixty seconds. Ninety seconds. One twenty. I felt much better.

‘Okay, I’m ready.’ More to myself than anyone. ‘Thank you,’ This to the volunteer.

I started off. Not fifty minutes later, I was walking again. The suck had returned in full force. My fuddled brain didn’t register at the time, but this is a perfect case in point for Samuele Marcora’s psychobiological model. I wasn’t at my physical limit. Instead, I was at my psychological rope’s end.

I walked off the course for the second time.

‘Run with me.’ Said a voice from the track: an older athlete just starting his first lap. ‘Come on. Don’t quit.’

That’s what it took. Like pickle juice to a hyperactive, cramp-causing motor neuron. This stranger’s most banal of encouragements was enough to snap the funk. I chased him down and did as I was told: step for step.

I tried to engage the guy in conversation, to thank him for making me get back up. He wasn’t super keen though. He didn’t want to chat. He wanted to work. He also wanted me to work – I think. I’m sure I’m projecting at least a little, but that’s the story I invented at the time. Regardless, I owe him. Thank you Joe from Scarborough.

While the run was the most noteworthy leg of last Sunday in Welland, none of it went at all well.

I can no longer boast that I can compete in the sport of triathlon without ever swimming. I had pulled off a reasonable, a to-be-expected 2:00 pace at IM Muskoka last year on very minimal swim training. This year I have not swam at all.

My ride to the race and my X3 teammate Katrina gently poked fun at me on route to the venue. ‘So the closest you’ve come to swimming since August was a bath?’ she asked.

I actually felt fine in the swim. A little bored, but fine. I knew I wasn’t pulling much water. I knew my stroke was weak, but it felt fine.

Fine until I reached T1 and saw how lonely my TR1 – my new Garneau superbike – looked on its perch. Yes, she was the last one on the rack. I had never been a front of pack swimmer, but I had never been last – never – not even close! Dismay and embarrassment fought for real estate in my mind.

Yeah folks, not swimming does not work.

Then maybe three minutes after leaving T1 – just as I was getting settled – my attempt at redeeming my swim with a solid bike was interrupted by a train. Oh yes. A train in the middle of a race. Granted, it was very short – as trains go – but it was still a full stop and enough time for a healthy string of obscenities.

Having had my Garmin fail to pick up my powermeter in Guelph, I took no chance. I rode with two! They both worked, and after the train toot-tooted past us, I got to work chasing down the field at 245W.

It was very windy.

I was running 90mm Energy Labs front and rear. Despite how well the TR1 typically handles crosswinds – even with a deep front –There were a handful of moments where I had to fight the bike. I watched other athletes wonder all over the road in their own battles with the wind.

Drinking when I was thirsty, I still went through four 750mL bottles in just over ninety minutes. Yeah, that’s more than 2.5 bottles per hour.

I began to mentally check out after the 35km marker. My power dropped below target. It was a struggle to keep it in the 230s, then the 220s. In the last 5k my Garmin stubbornly displayed wattage in the 210s – no matter how much anger I directed at it.

So that was the state in which I started the run.

Eventually I pulled ahead of the now taciturn, but still steady Joe from Scarborough. The back half of that second run lap and then the third were no picnic, but the unrelenting desire to quit was gone. Vanished! The dizziness and headache – my warning signs of heat exhaustion – were there by the end. I tried to stay with a fellow 35-39er who passed me with fifteen hundred meters to go, but his 4:20 pace was too strong. I had the drive back, but the legs were starting to buckle. This feeling was familiar. This is where I live at the end of races. This is what I know, what I can overcome.

So I did end up finishing. Not counting the time I sat at the aid station and pouted, I paced a 4:48. This was far off target, but not an unmitigated disaster in those temps and under a cloudless sky.

There are many lessons to be learned here. I always tell my guys that a hard race, a bad race teaches you more than a good easy go ever will. I have my list: from the utility of swim training to the importance of heat acclimation. I’m just not yet ready to think about it in any great detail.

Beaten, but not defeated